Just about the entire USA, other than Seattle, has been baking for the past week.  Hope folks have been properly hydrating during their Jams.

Our Green Beach was virtually deserted and smelled like a hayfield when I arrived.  The Big Apple was baking.  Robbie-Rob strolled in from the 5th Avenue side, and Joey arrived a few minutes later.  We wondered who was gonna be Yella this week and what excuses they would think up.  The First Lady arrived next, expressing her regrets on behalf of Mr. President.  He was busy negotiating the raising of the debt ceiling or something, so she brought the Yella Jersey for him.  THAT is Love, right there.  Justin-Heaver and Sean moseyed in just after Ivan-TJH, and Newlywed Tony,  Doug E. Fresh, Roger, Fearless Lou, The Ageless Trevor Brown, Alex (CDW), Chuck, Kevin, Kevin-Newby, JB, TedShred, and a late arriving Lovely Chrissy, along with and a new Susan were the hearty souls who ventured out.

Joey was the first one ready to play, having nailed up quietly, focused on the task at hand.  Roger took up the challenge while I got up I got up with Ivan-TJH to get my Heave on.  Warming up seemed oxymoronic given the temperatures, and we locked in quickly.  His Southpaw backhand had plenty of counter Zzzzz’s for combinations with the 175, and it was a blast playing with him, as always.  Fresh and Rob got going as a pair, with TedShred and Forever Trevor, and Chuck and Kevin setting up shop as well.

After Ivan and I broke for water, I joined Lou and Ted, while Ivan went out for additional long tossing.  The three of us have had a unique Flow that I attribute to winter Jams a few years ago.  This was really helped in this Jam because the heat was trying to squash us all.  TO was his normally amazing self, and Lou has really stepped it up since his return.  Many new combinations, with a very solid semi-Vacation seal added to his arsenal.  The Oracle tweaked his ankle during his earlier, so he said he was gonna join us for a mannequin Jam.  Of course, he ignored his pain, shredding extra hard when New Susan, a woman with an easy smile (and a twinkle in her eye for a certain someone!) arrived.  Inspired by the audience, he moved purposefully, making all types of plays, including a nice Gitis, without incurring further injury.

Tony and Kevin-Newbie got up late, while Trevor and Ivan rotated into my Jam with TO and Lou as the evening drew to a close.  When all was said and done, we all ‘Punched the Clock’ and had a blast.  Every Jam was Jam of the Day.  The funniest moment cam when Joey realized that he neglected to bring an extra shirt to change into.  He asked if anyone had a dry shirt.  Well, it just so happens that everyone out this week was in attendance for our last gathering.  This meant that the Cowardly Coverlet was fresh and clean, just waiting for someone to put it on.  The Oracle looked simply radiant as he escorted Susan off to dinner.  We do have fun.

The Board wants folks to know that next All*Star Guest Jammer Initiative Honoree has accepted our invitation.  Randy Silvey will be packing his special towel, and coming down August 25th!!!  Mr. Silvey is a great player and is a blast to hang out with too.  This would be a great time to make your way to NYC.  So, when are YOU comin’ down? 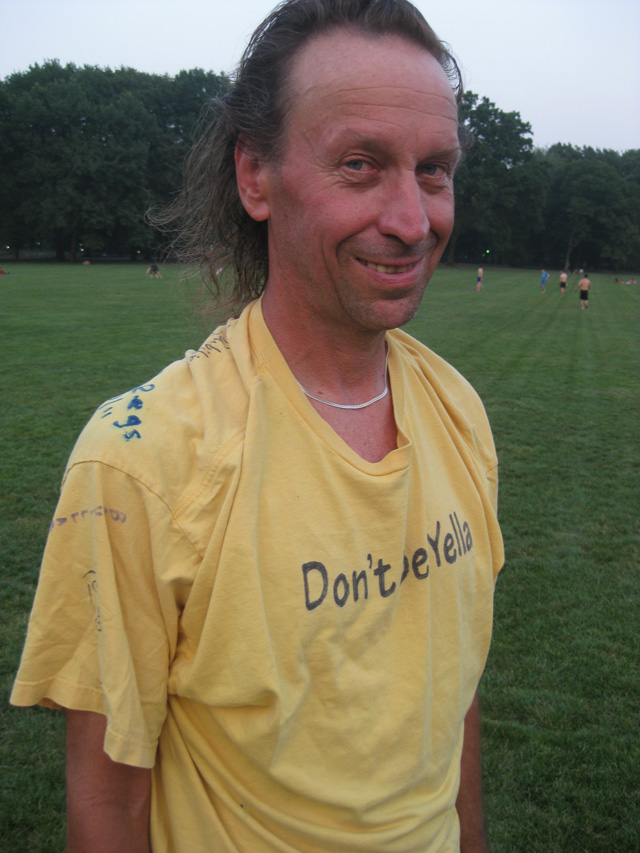 Joey asked "anyone have a dry shirt" ? Photo by (c) Rob Fried