The All*Star Thursday Chronicles: The Mighty Mary is NOT Contrary Edition

Hail and Well Met to all our Plastic Peeps!

August 2-5, 2012 was great for Jammers everywhere. First, Big Ups to everyone who played in (and pulled off) the FPA World Championships. It looked like an incredible event and the fact that it was streamed live made it feel like we were all a part of the festivities. And Congratulations to all of the winners.

“We Are the Champions, My Friends…”

The Tribe has been lucky enough to host reigning World Champions as part of the All*Star Thursday Guest Jammer Initiative for the last two years.

But this year is wildly different! (not so) Young Daniel O’Neill, (not so) Young James Wiseman, and Emma “Big Dog Inside!” Kahle, our trio of Padwan Learners are all coming home with the Gold. Not only that, Char Powell, a Noo Yawkuh at her core, is a World Champ as well.

Special thanks to PK (Namesake), Lori Daniels, and Mike Galloupe for Shredding so Heinously with our Homies! Now, back to our regularly scheduled programming…

The All*Star Thursday Guest Jammer Initiative welcomed Mary Lowery to our Green Beach as our first Honoree bearing the XX chromosome combination. Let me state it plainly: Mary is a Total Bad A** Jammer!!!!!! Her Flow is only surpassed by her humble, down to earth, and fun nature. We are lucky and blessed to have had her here.

And folks turned out from far and wide to bear witness, including: Doug E. Fresh, The Roginator, The Oracle, TedShred ‘n TLC, Jonathan Weinstein (in from Prague), Alan C. (our resident Guest Jammer), JB and Sarah, Jestin Heaver, Ben Heaver, Bradford T., Quinn-O, The Ageless Trevor Brown, Ralph Heaver, Geoff Gregory (from FL), Bob, Kevin, Ivan-TJH, Chris Heaver, Susan, Meg, Claire Heaver, Mighty Mike Heaver and Simone, and the Velasquez Brothers. Yes, both Jens and Erwin came down for the Jam. Oh, and The Gamboa was in play. Man, it doesn’t get any better.

After social graces were exchanged, Fresh and Mary started it off with some very nice Northwestern Flow. It was easy to see why folks talked up Ms. Mary so highly. First of all, her throws were all strikes with Z’s, and I could not tell if she was right-handed or a Southpaw. Her sense of anticipation of the what the disc needed to do at a given moment in time was really excellent. And inspirational, forcing Sir Roger and I to get ourselves up and at ’em. We started easy, but before long it was off to the races with Roger snapping off overhand counter Z’s and backhands with his typical aplomb. Seeing that we had broken a sweat, The Oracle said “Ahm comin’ down!” and we welcomed him with open arms. I enjoyed this Jam because there we hit O’Malley’s in three of the first four throws, with the only miss coming after I hit a perfect Teabag pass to Roger, who zinged to Joey, who in turn hit a sweet Scarecrow brush back to me and I…dropped it. ARRRRGH!!!

When this Jam had run its course, we saw Tedshred, Alan C., and Mary tearin’ it up. Joey hopped in with them and that Jam went to Eleven for quite a stretch. In fact, that was the Jam that we had to “Force Quit” in order to take the group shot above. After picture time, I got busy as a fourth in some Jam when I espied Erwin Velasquez entering the Zone. There was a rumor that he and Jens were going to make a joint appearance at an All*Star Thursday for the very first time, so we were halfway to history.

Mary-Mary (of the Northwest), Erwin, and Geoff in the House! 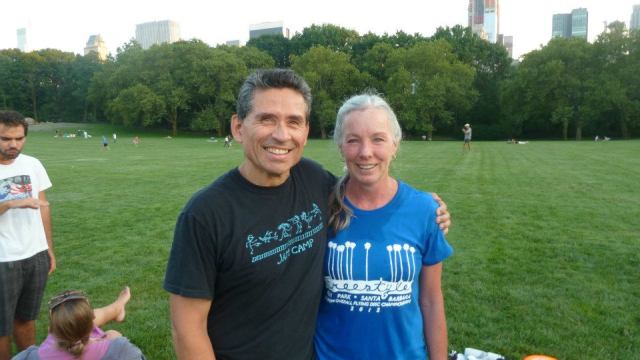 I had the pleasure of warming up Erwin and getting him loose. Man, is he freakin’ good! His rolls, throws, and seals are still the stuff of legend. We got our Shred on and then Jens turned up. SCORE!!! I sent Erwin off to a “Big Boy” Jam with Ted, Alan, and The Oracle, and had the honor of getting Jens warmed up too. Your intrepid reporter was damn near overwhelmed by this stroke of luck. Warming up both of the V-Brothers on the same day solo? THAT is Livin’!

Jens headed into a Jam with Erwin, Ted, and I think Joey, while I set out to get my Heave on with Ivan-TJH, Ralphy-Boy, and Geoff the Floridian. That was FIERCE! Strikes at 75+ yards with enough Z’s for some 175G Shredding. Jammin’ Heavers of the World UNITE!!!

The last Jam of the evening featured me, Mary, Ivan-TJH, TedShred for good measure. We were chased outta the Green Beach as dusk settled in. Then it was off to the Chateau Meier for pizza and tasty beverages. It was there that TedShred formed a committee of between two and sixty-nine to decide who had earned The Gamboa. The decision was tough given all of the luminaries on hand, but the choice was clear. Mary Lowery was the winner!

Now for some news. The All*Star Thursday Guest Jammer Initiative welcomes Tommy Leitner on Thursday August 23rd. Not only that, The Board has extended an invitation to our Brother Fearless Lou Sumrall to join the Festivities as well. Our dear friend and Heckler Extraordinaire has been away taking care of his Mom since last fall. We have missed him terribly and at thrilled he will be able to make it back. This is going to be a really big deal. So there really is only one question. C’mon, do I really have to ask? Ready in 5, 4, 3, 2, 1…

Are YOU Comin’ Down?!