The weather gods designated June 30th to be a Top 10 day in NYC.  80 degrees, a bright sun set high in a deep blue sky, with puffy cumulus clouds floating by at a lazy pace.  Really beautiful.  As I wandered in from the southwest corner, I saw Jaime-TJH, settling in while Barak strode purposefully out to join a long tossing Ralphy-Boy Heaver, and Nálini a new addition to the crew.  Barak throws a mean backhand for strikes at distance, but couldn’t stop himself from tossing in a few hot combos, including one sealed with a Vacation that would’ve made Skippy Jammer proud.

As Jaime-TJH and I stretched out in preparation for the day’s activities, Robbie-Rob (still basking in the glow of his Gamboa victory) and Young James arrived, sitting down with Emily (Mrs. Barak), followed by Roger, and the Ageless Trevor Brown.  The latter was so very Yella after missing last week’s A*TGJI visit by Richie Regs, that he barely got a chance to put down his bike before Roger presented him with the Jaundiced Jersey.  Moments later, Alan C. suddenly appeared for another surprise visit.  Our New England brother has been a big part of All*Star Thursdays right from the start, way back in 2004. It’s always a better day when he turns up.  Rounding out the crew were Doug E. Fresh, Jill, BenJAMin n’ Claire, Guitar Sean, Kevin, Barb, a rare A*T appearance by Young Daniel, Claire-Heaver, TedShred and The Lovely Chrissy.  I’ll share more on the headline later, but ya’ gotta know it was a banner day.

Jaime and I got up to get our arms loosened up.  I have been creaking a bit, with a slow to heal groin pull, and a disagreeable hip.  Every time I start complaining, I think about Forever Trevor.  Then I tell myself to shut the ^%#* up, and play.  The arc of the neon green Ultra Star tracing against the backdrop of the deep blue sky was as intoxicating as ever.  We settled into a nice groove and then I took a quick water break before getting into another heave with Ralph and Nálini. The latter has a strong forehand, solid backhand, and reads the disc really well.  After some nice flights, I broke a sweat, and it was time to Jam.

I subbed in for Young James who had been Jammin’ with Barak, who was wearing his traditional “I Am Batman” shirt.   Getting jam solo with him is a blast.  He’s a pure clock kind of guy, though he plays counter better than he lets on.  His athleticism is almost unmatched, and he hit two of those zany ‘high’ Gitosis seals in the first few moments of the Jam.  Roger and Fresh paired off, as did James and Alan C.  Everyone got it going pretty good.  It was time to break for a tasty beverage after Barak nailed yet another Hein Vacation, and I hit my onus move: a Tea-bag kick brush, straight to jumping under the leg catch.  I decided take in the Jams for a few minutes, and it was really a treat.

TedShred busted Alan and James, adding his special blend of high-test fuel to the fire, while Daniel got in with Fresh and Roger.  Flow is always the name of the game, and this trio had it in spades.  Roger, in particular was really killing it.  In one sequence, he built the Shredful combos that he finished with: 1) a Gitis; 2) a Gitosis; 3) a Phlaud (eliciting shouts of “One Dollah! One Dollah!); 4) a mean triple-Fake; and 5) a vertical UD kick brush pass to James that was simply miraculous.  Thus, he is The Reliable One.

Jaime-TJH, Kevin, and Chuck, who took a break from his video work to do some shredding of his own, got up together.  It’s really cool seeing folks adding new moves to their arsenal, and making the transition into full-on Freestyle.  Robbie-Rob and Barak staked their claim to a sweet shady spot near the rock in the south east corner of the Meadow, while Ted, James, and Alan tore it up nearby.  These Jams were compelling, so I wandered over to watch more closely.  Rob and Barak both were very focused, with each of them hitting killer combinations with huge seals, including a ‘No Bones’ Gitosis by Barak.  When I shifted my attention to the other Jam, TedShred saw me lurking with intent to loom, almost throwing me the disc.  James, said “I thought you were already in”, forcing me to join the fun.  During this one, Alan hit two (2) Gitis pulls, sealing one with a Phlaud that was worth at least a buck-fifty!

The length of the day made it so folks kept changing their affiliations.  James sat after we all got serious flow, and I went for another taste of Meadow Ambrosia and a quick pairing with Forever Trevor.  This gave Daniel a shot at our Guest.  These three all just went off, which brought on a singular moment in All*Star Thursday history.

After some great co-ops, with high-risk passing, TedShred chased down an errant set which had him dancing gingerly through the crowd, tip-toeing around people, blankets and bags, before making a leaping under the leg catch.  Then, he grabbed a Margarita from TLC, and sat down.  That’s right, Sir Tedley of Oberhaus actually sat his a** down, and chilled the &%#^ out.  While sipping a cocktail and relaxing, he told me “This has NEVER happened.  In all of these years, I’ve never sat down to watch, and drink a Marghie…It feels a little strange, but this is great!”  He actually stayed put for the better part of a half hour, but as dusk settled in, he got up for some speed-flow with Young James, while I got in a Light Toss with Young Daniel to close out the evening.

The Hard Corps of the Big Apple is truly Blessed.  The Tribe is an extended family with a Most Fun Wins ethos motivating every single one of us.  We even had two recruits (Andre and Kevin, each around 20 years old!) come by to learn more about Freestyle.  The former can already delay both spins, and both are poise to take the leap.  Spreading the Jam is what it is all about.  We want YOU to follow Alan’s lead, and just show up one day.  You definitely won’t regret it.  Until then… 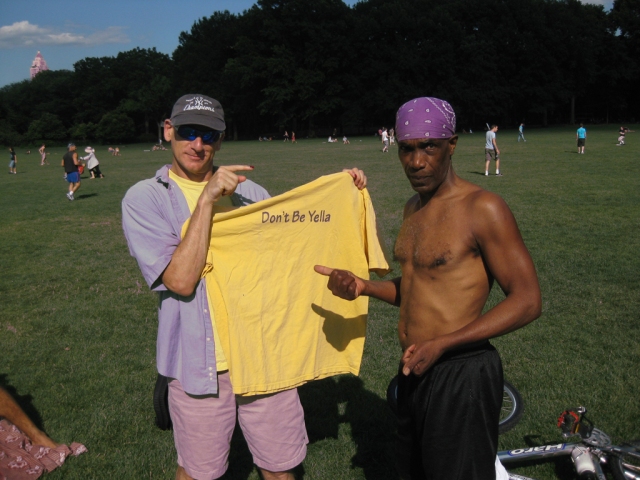 Who is going to be wearing the Yella?

Trevor Brown, or should I say Trevor Yella ! 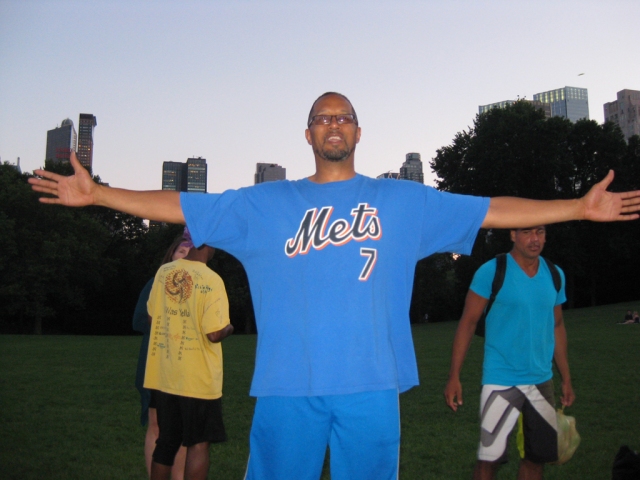 Tall Paul displaying his allegience to the Mets and Jose Reyes