The All*Star Thursday Chronicles: 2014 Pre-Season, A Cold Home Opener, and The Virginia States

Hail and Well Met to all Plastic Peeps,

The Winter of 2014 has been unrelenting here in New York and across much of the US. We all learned the term “Polar Vortex” and discovered that when it comes to visit your hometown, it likes to hang around gawking (growling) at the tourists and citizens alike. This did not prevent The Hard Corps of the Big Apple from getting our preferred form of physical therapy on. 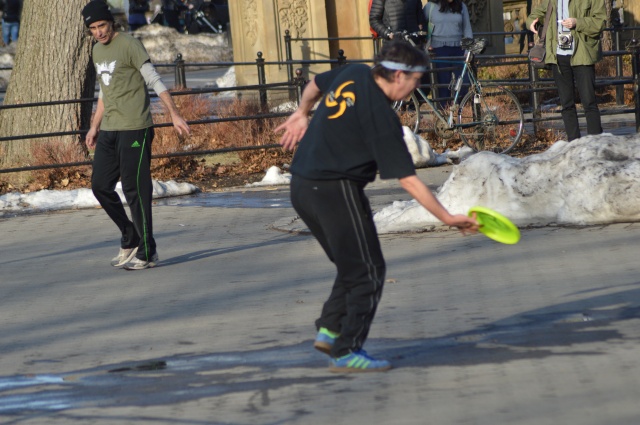 Jammin’ the Nook: Prepare to Zing!

The Bandshell served as our traditional “home away from home” with Sheep’s Meadow being closed for the season. The first Preseason A*T fell on a Tuesday due to a 62 degree anomaly, featuring Roger The Reliable, Bradford T., Ivan-TJH, and me. Then we had Lord and Lady Kenney come in from J-Ville for an A*T birthday surprise for Daniel O’Neill, who played an excellent Brutus in and Off-Off Broadway production of Julius Caesar. Next up, Quinn-O called for a Workingman’s Jam on a chilly late March day, getting Roger, Robbie-Rob, Chuck to join him and me begging off for the Sabbath Jam the next day.

And we added some fresh blood with the arrival of Giovanni Coppo for the first A*T of April, a Jammer of extraordinary talent who was imported from Italy. He is a real blast to play with and is a welcome addition to The Tribe due to a combination of Shred-Ability and likeability.

Then there was a teaser when the Meadow opened up a week earlier than anticipated on Sunday April 6th but our hopes were dashed due to excessive moisture that next (All*Star) Thursday. The Tribe gathered at the Bandshell once again with Rob, Rog, Gio, Forever Trevor, Jaime, Chuck, Fresh, Daniel, and me having a blast and longing for the lush green grass of home. Yesterday – the official Opening Day of our All*Star Thursday 10th Anniversary Season – was cold and windy. Kevin, The Ageless Trevor Brown, Roger, Bradford T., Rod Heaver, and me braved the elements for some Plastic Play. It was really just “punching the clock” but we wuz there.

“The Walking” walking by…

Jake shows them how it we do it over here!

Broke in a brand new Token Disc upon our arrival, getting into it with so many folks that the mind bends. Since I was too busy having fun to take notes, I have to go with a few impressions. Jamming with Jake and Matt made it feel like the “Tall Man Jam” was in full effect. It was very cool because they play in total sync with one another, so Flow is natural and everyone moved seamlessly in and out of the fray. I didn’t get Arthur until the Last Jam, but he too, was incredibly easy to play with. He saw things several moves in advance and was always in good position. So thank you, Sir Arthur of Coddington! Among many others, I got plenty of Rodney and Bethany, Daniel (my Roomie) multiple times, Lash, Gerry, Mike, LOOOOOUUU, Erwin, Jens, and a bunch more. Oh, and then there was time spent with one of the best facilitators Freestyle has ever seen: Dan Yarnell.

Mr. Yarnell is masterful. He can throw both spins with Z’s and accuracy. He takes both spins equally well, seems to use The Force to manipulate the disc, and is always making the right play to push the Jam to 11. Arguably my greatest moment of an incredible weekend came during the warm-ups for the Saturday night Freestyle competition at the Fieldhouse. For only the second time in my life, I was convinced to dive in the deep end and play in the tournament. Fearless Lou said “Let’s Do This!” and I could not refuse. Being a “Jazz Player” means I am all about improvisation, so putting together a routine was out. Seriously. Out.

So Lou and I are throwing it around on the artificial turf while folks are fine-tuning their presentations, and suddenly there’s Dan Yarnell hopping in with us. It seemed as if things started to make more sense. Throws, combos, co-ops, and seals Flowed more easily, and the notion of just playing Frisbee filled me with a sense of calm. While my four bad throws (FOUR &*^%&^$%^$#^ Bad Throws!!!) doomed us to missing the cut in the tournament, Fearless and I acquitted ourselves well, and we owe it all to our catalyst, Sir Dan of Yarnell.

Erwin preparing to pass it UD to J-Will.

The 2014 Virginia States was really a Blessing on every level. Wonderful people, great vibe, good food, and lots of beer for those who like that sort of thing. Thanks to Roger and Tricia for their hospitality, and to Daniel for both bunking with me, and encouraging me to compete. 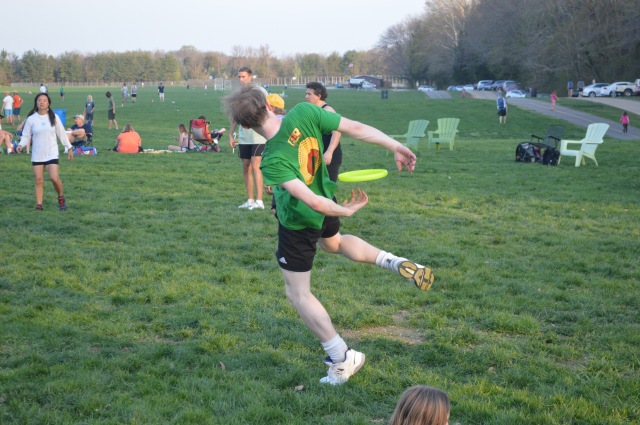 Daniel O’Neill is a Baaaaad Man!

Let it be known that the One and Only Bethany Sanchez will be in NYC for All*Star Thursday on June 12th and we are looking to make this a big one.

So YOU should come down…
And get your friends to come down too!!! 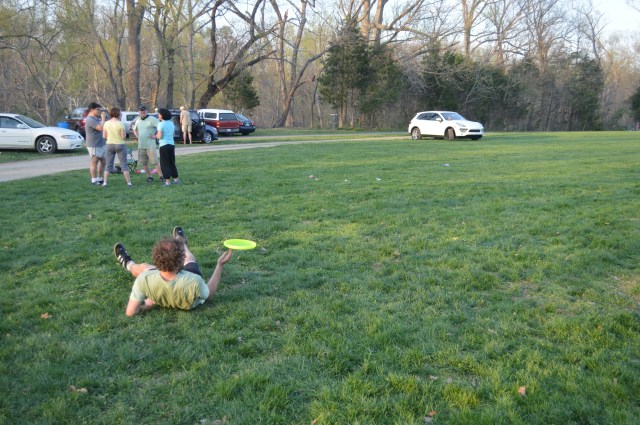 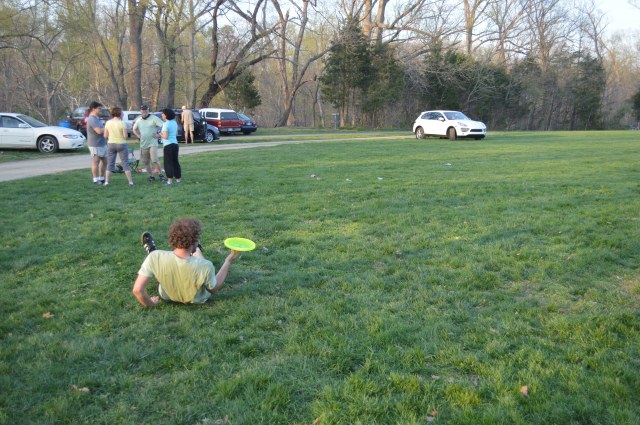 1 Response to The All*Star Thursday Chronicles: 2014 Pre-Season, A Cold Home Opener, and The Virginia States