The All*Star Thursday Chronicles: The Tour de Park/Return to The Nook Edition

First, our deepest condolences to Sue Malatsky, a member of the Tribe who lost her Mom last week. The memorial service for a truly remarkable woman was held just before our All*Star Thursday gathering on May 30th. Please be mindful and let your people know that you love them. That was a chilly day and the mood was a bit somber as we also welcomed home Richie Regs, in town for a visit. Not much to say other than a group of us did punch the clock after paying our respects. There was a very nice day that followed where Ralph Heaver came back for the summer, getting into a MONSTEROUS Heave with me and Jaime-TJH. Gotta Like That! 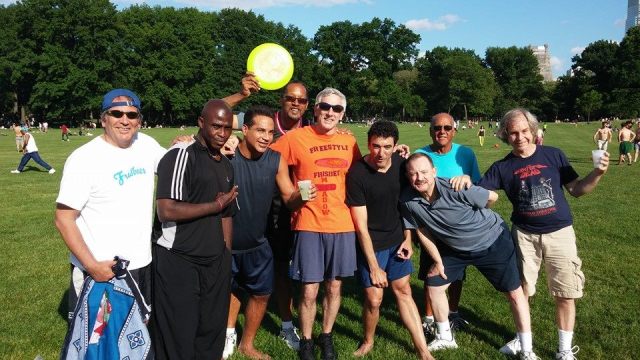 All*Star Friday: The Return of the Floridians

On to this week’s happenings…

The Bizarro World run of weird weather continued, but with a twist. We had some heavy rain in the morning, so it was not exactly a surprise to see the red flags of “Thou Shalt Not Play” decorating our Green beach as I rode up on my Trusty Steed. But the gigantic corporate run sponsored by a “too big to fail” institution effectively taking over the entirety of Central Park below 86th Street was a bit of shock. It was CRAZY how much of the park was fenced-in, closed off, or filled with color-coded corporate apparatchik scurrying about. 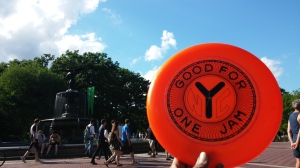 Plan B was to go to one of the two schoolyards near Chez Meier. NOT! One was closed, and the other filled with little street urchins and their parents because school was closed. Okay Paul, try Plan C and check the Great Lawn since you have the bike and can move quickly. And??? NO! Closed for pesticide application. Plan D–The Bethesda Fountain? Well, it was open with room to play around the tourists, so I planted, posted on the New York Jammers FB page, and awaited our peeps.

First to arrive were Richie Regs, Dexter Strunz and his lovely lady Lucia from the Czech Republic, followed by The Oracle. None of us were thrilled because: A) the hard concrete there is in red brick form; and B) is uneven at best. Just as we were about to start the Jam, Daniel and Emma strolled up, fresh from winning performances at The Jammers. BTW – Congrats to all who attended that great event, and especially to our Emma who recently graduated from Columbia University before turning in an MVP performance in Jacksonville…with a trophy to prove it. Bravo!

So then there is Sir Daniel of Steady Flow saying “This is the spot?? Dude, can we try The Nook? There’s grass by the (not Dave) Schiller Statue with room for one or two Jams, and we have concrete options.” This suggestion was not entirely altruistic as he was wearing flip-flops, so bare feet + red bricks was not a pleasant thought. So, off to the Nook we went, meeting up with Chuck, Doug E. Fresh, JB, The Ageless Trevor Brown, Quinn-O, and Susan the Singer. 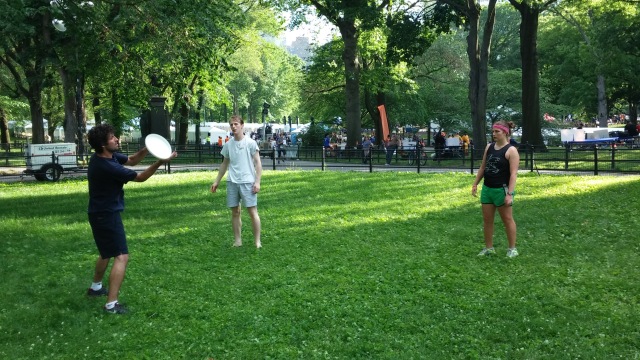 The first Jam featured Dexter, Emma, Daniel, and me, playing on the very long and clover-filled grass by the (not Dave) Schiller Statue. Dexter is fully ambiDISCerous with great feet, excellent brushes, and tremendous Flow. He also has this crazy Lobster Claw/Leg Catch that made even Daniel do a double take—to go with his high-rev motor and overall fine disc manipulation skills. This was my first Jam with Emma in ages as she has been busy finishing school and competing hard with NYPD, Columbia’s Women’s Ultimate team. During her freshman year, there was a stretch were it was me and Emma Jamming all the time, so seeing her growth as a person and a player has been just a thrill. The Jam itself was Shredful, with lots of passing, smokin’ seals, and multiple O’Malleys. I even managed to pull off a Tea Bag, to kick brush, to brush pass to set up an O’Malachy (two full circuits of the Jam with no delays). 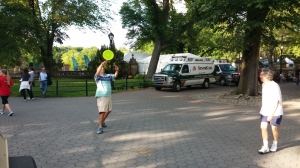 Richie, Fresh, and the Quinn-O were going all Old School Counter vs. Clock Jammin’, with all three mixing it up enough to be able to shine with both spins, while JB, Trevor, and Susan the Singer were tossing it around with great joy. Oh, and The Oracle’s Jam with Chuck was high level, with Chuck raising his game by the week and Joey maintaining a level of excellence that remains, well…Oracular. 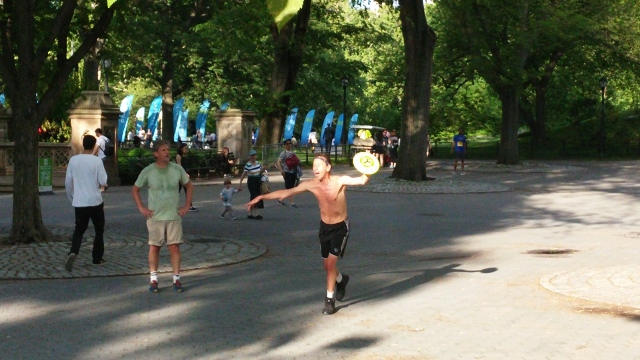 Next week is going to be a big A*T with the a Guest Jammer from the great state of Wisconsin joining us, and the promised return of the Co-Founders of All*Star Thursdays TedShred and The Lovely Chrissy. The Tribe has dearly missed these two wonderful people this spring and to have them back makes my heart sing. So…

When are YOU Comin’ Down?

3 Responses to The All*Star Thursday Chronicles: The Tour de Park/Return to The Nook Edition