A Strong What Up to All Plastic Peeps, 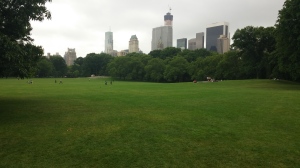 Clouds and high humidity greeted me as I entered a virtually empty Meadow from the Northwest corner. While it was not a pretty day, the conditions (which we don’t need) were really excellent. And who might be on hand for the early shift Jam? Why, it was Sir Steady Flow, Daniel O’Neill, and the Lovely Lady Bethany who was in NYC on biz, and she wisely scheduled time to join us for an All*Star Thursday. This pair had already broken a sweat as they prepared a routine for a certain tournament taking place in Medellin this summer, so we chatted a bit while I nailed up.

Not wanting to waste any time, we got up to play knowing that there were a number of folks likely to join the fray, including an appearance of Freestyle Legend Kerry Kollmar! Also on hand were Jaime-TJH, Ivan-TJH and his Beloved, Mojito Jay, Kerry’s Lovely Lady Paige, Bradford T., Dexter and Lucia (Guest Jammers for two weeks straight!), Fresh, Keith Heaver and Adriana (congrats), Mark Dana, Chuck, Alex, Kevin, and a late arriving Roger. 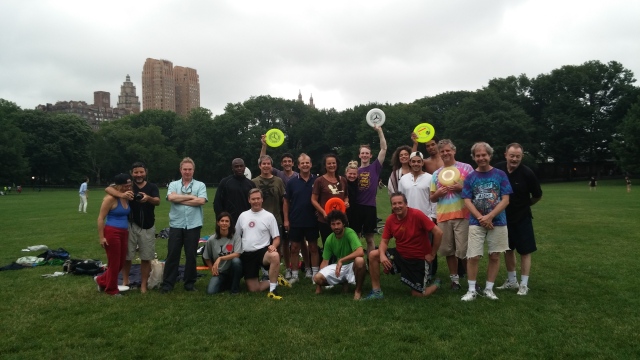 Another Great A*T, with The Reliable One just outside of camera range. 🙂

Our first Jam was marvelous and morphed into the Jam of the Day because this was the one that never really stopped. My orange Token disc got the full breaking-in treatment with folks rotating in and out from this early moment, until the end of the evening. Bethany is wonderful to play with. She is very smooth, throw strikes, shares the disc, and seals with great aplomb. And Daniel is playing with such grace and supreme technical prowess that Magic is likely to happen at almost any moment. We were really getting into it when Dexter hopped in, adding his tremendous motor and great footwork to the mix. We hit consecutive O’Malleys and then an O’Malachy (twice around the circle with no delays). Daniel stepped out for water and to greet his friend (Gus?), but there was no need to fear as Ivan-TJH subbed in, barely missing a serious Levitation Gitis on his first play.

Brad and Kerry got into a very nice Old School Jam, with lots of quick catches and cool stuff. This got Daniel’s attention, so he slid into that one seamlessly. For myself, I broke away from my Jam for some hydration and got into a Mighty Heave with Jaime-TJH. As always, this was a BLAST! The Accurists have really been locking in and Shredding at distance, with Jaime hitting all kinds of combos with that 175, and nailing a Gitis to boot! When we wrapped that one up, Jaime got up with Chuck and Kevin and he later finished his Jam with a CHOMP of a Scarecrow after a sweet combo. Myself, Ivan-TJH, and Keith Heaver got into a new 3-disc game called “Simultanaeity” that Keith created, which was very cool. Starting with three different color discs, it is essentially three independent games of catch among the same three people. Hard to explain and wonderfully challenging to play. 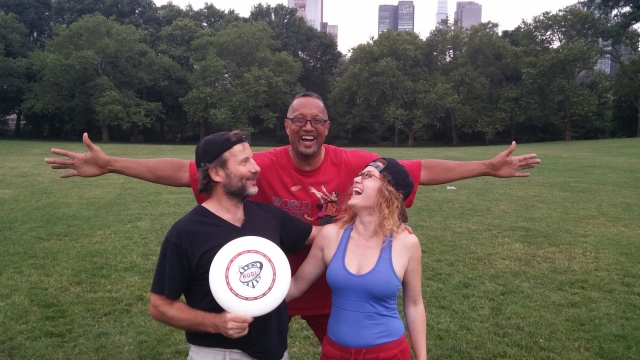 Newlyweds laughing at some guy with a large wingspan.

Oh, and on the (pro)creation front, Keith just announced that he and his new bride are expecting their first child. Congrats to them both! 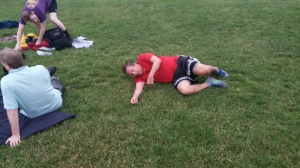 I stopped to watch as Fresh, Ivan, Daniel, and Dexter just Went OFF! This one went to 11 on multiple occasions and the Flow was ridiculous. When Mr. Fresh hit the deck, having been Jammed into the ground by three sets of young legs (documented), I jumped back in. At some point Roger brought his Juju to the table, and we all had a real good time heading into the evening. Malachy’s was up next for some food as well as malt and barley based beverages. Oh, and then there was a lovely Saturday at Long Beach with lousy wind, but great company. But that is another story. 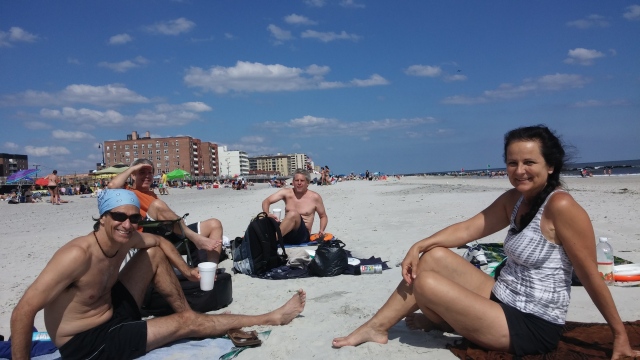 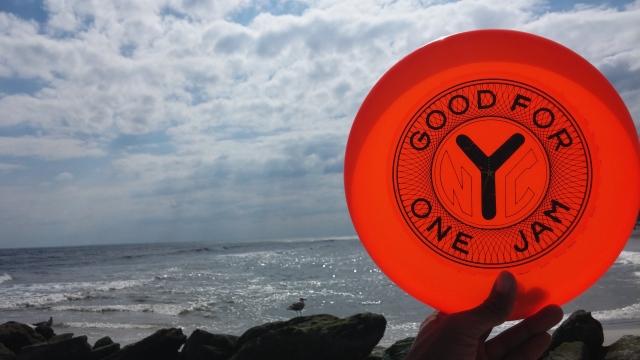 So, what else can I say? Hmmmmm…Well there is this: