2012 in NYC has been notable for its absence of two things: snow and extended periods of really cold weather. While the white stuff made an appearance at Chateau Oberhaus when TedShred and The Lovely Chrissy hosted their annual NFL Championship Sunday Jam, the Hard Corps of the Big Apple has been playing pretty much through the winter.

Suddenly March was upon us.  An early harbinger of Spring, not unlike the return of the swallows to Capistrano was the arrival of Paul Kenney–and his much better half Cheryl. They were coming in a week earlier than usual for an Allman Brothers show at the Beacon Theater. They also were kind enough to place an order for spectacular weather for the first All*Star Thursday Pre-Preseason gathering of the Tribe. 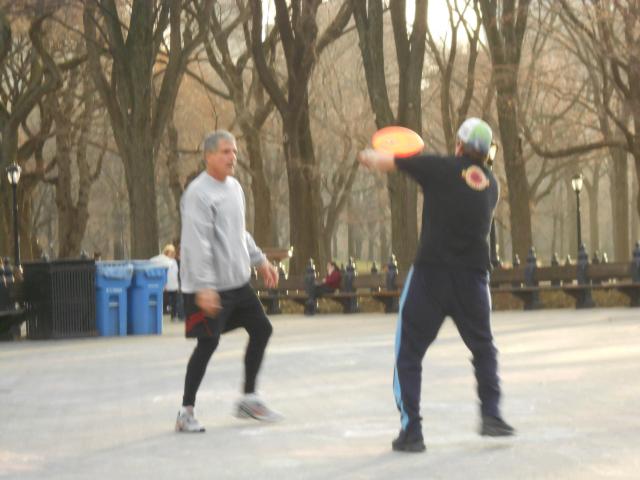 It was about 70 degrees when I arrived to see PK Jammin’ with Doug E. Fresh. After greetings were exchanged, I went to nail up and discover that the two strangers that I had walked into the park by Strawberry Fields behind, were actually Plastic Peeps from our Famiglia Italiana. Fabio Vinciguerra–along with Marianna and Sylvia–were in town and so our first All*Star Thursday gathering had some international flava. Rounding out the crew were Tony Parker (who must have been Jamming in his living room all winter), Mojito Man Jay, Chuck K. our resident videographer, Bradford T., (not so) Young Daniel and Sir Roger, who is on the DL recovering from a snowboarding mishap.

The Jam of the Day was the continuously flowing Mob-Op the was anchored by Mr. E. Fresh and my buddy Namesake. I jumped in, followed by Fabio and Sylvia, both of whom shredded.  PK was playing very well, doing some nice turnovers and hitting the “Center Snap/Hike” brush in bunches. Doug E. was treated us to a variety of sweet moves, along with the occasional Doug Mug for emphasis.

Fabio was very skilled, snapping off nice throws with Z’s and accuracy, while nailing a number of Hein Combos with big chomp seals. Sylvia’s Flow was excellent. She consistently made good decisions regarding when to pass and when to seal the deal.

Tony Parker was a bit nervous about bustin’ the Jam, but with a none too subtle nudge (“Get in there—just don’t F*** up the Flow”) he really added positive energy to the Jam.

A late arriving (Not so) Young Daniel gets his own paragraph. He continues to improve exponentially. He sees things differently–converting throws and passes into the most remarkable combinations and seals. And his Flow is almost supernatural. He will pull out Gitis or a double spinning Triple-Fake from out of nowhere. We are so lucky that he and (not so) Young James, who is on a European Walkabout, have become part of the Tribe.

We stayed well into the darkness, fueled by Mixmaster Extraordinaire Mojito Jay’s tasty beverages. A wonderful way to start the All*Star Thursday Season.

We stayed well into the darkness, fueled by Mixmaster Extraordinaire Mojito Jay’s tasty beverages. A wonderful way to start the All*Star Thursday Season.

This entry was posted in A*T Chronicles - 2012. Bookmark the permalink.