Hail and well met to all my Plastic Peeps,

The unrelenting Winter of 2015 piled an obscene amount of snow on the eastern half of the country, and that made Jamming difficult. But once the clocks changed, that meant we had enough daylight to “Do that Voodoo that We Do So Well!” And so, the second Thursday of Daylight Savings Time brought out a crew of legendary proportions.

I knew something unique was happening as I strolled through Strawberry Fields on my way to the Bandshell and was approached by a Busker/Poet. She shared a few nice verses on creativity and pursuing opportunity that made me smile, and put me in the right frame of mind for Jamming. Cheryl Kenny and her Beloved were coming into town to check out a David Byrne Tribute Concert at Carnegie Hall, Sue Strait was in NYC to do some research in her chosen field of academic pursuit, and both scheduled their trips around (All*Star) Thursday. Cool Beans already, but there was more to come.

When I reached our Hallowed Ground, Robbie-Rob, PK, Cheryl, Daniel O’Neill, James Wiseman, and Fearless Lou (back from Kansas) were already on hand, and just a few minutes later Emma Kahle walked up too! She had returned to Seattle for grad school and was in town for a surprise visit. Then TedShred and The Lovely Chrissy came in and I told Lou that we were the only Jammers out there who were not World Champions, so we had better step it up. He just grunted “Less Talk, More Jam!”

‘Zackly what I should have been thinking.

Everybody in the Pool!!!!

We started with a Mob-Op, which was the operative word of the day. PK, James, Daniel, LOOOOUUUU, Emma, TedShred, and me. This was unbelievable, especially at this time of year. There was much fancy passing and transcendent sealing, with everybody getting their chance at the disc. PK is a brilliant orchestrator, knowing exactly when and where to pass the disc, or if it is time to crush a Scarecrow and start with a new throw. Daniel has added elements of self-assured physicality to his game through his training with Pilobolus, Emma still has “Big Dog Inside”, and James has developed a sense of touch that allows him to manipulate the disc in ways that defy the laws of physics. Lou has been in the lab too, chomping new catches and heckling with abandon. All that plus TedShred?! Oh Man, this was just great!

At some point Daniel broke off to Jam with Robbie-Rob, and PK went to join them too. I could not see too much of that one since I was in my own Jam, though I did see Rob hit a Teabag set to Double Spinning Gitis seal which was Very Nice. The Jams continued with mixing and matching players, and we were joined by The Reliable Roger, Kevin, Jaime-TJH, Quinn-O, and Doug E. Fresh as the sun began descending in the sky. Mr. Fresh has a newly installed bionic ankle so he is not playing just yet, but he is stepping up his game as our Heckler-in-Chief until he heals completely.

The chill in the air simply inspired the Hard Corps of the Big Apple to play on. The Last Jam featured James, Emma, TedShred, me, and LOOOOUUUU. As the rest of the crew chose to head out to Malachy’s for post-Jam beverages, we just kept on playing until the sun went down. What a GREAT Way to start the 2015 All*Star Thursday Pre-Season! 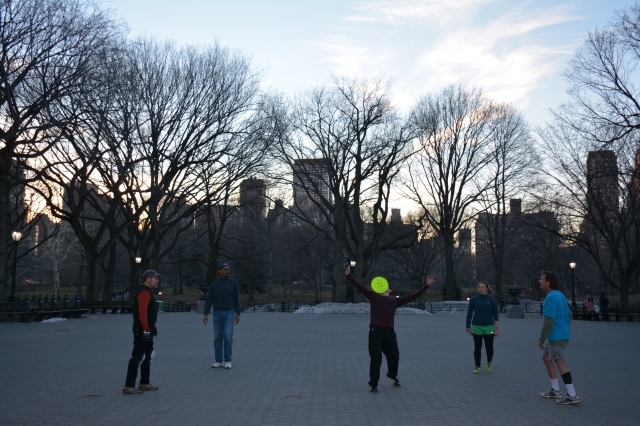 Oh, and as if that weren’t enough, Heather “Heater” Gray joined the fray at Malachy’s and was down for a weekend of Frisbee Frolicking which including gatherings at the House of Freshness and Chez Meier. Gotta Like That!!! Sooooo…

When are YOU Comin’ Down?!

P.S. Saturday’s Jams featured most of the above along with Ivan-TJH. We are so lucky here in NYC.